Helping the Planet to breathe a little easier 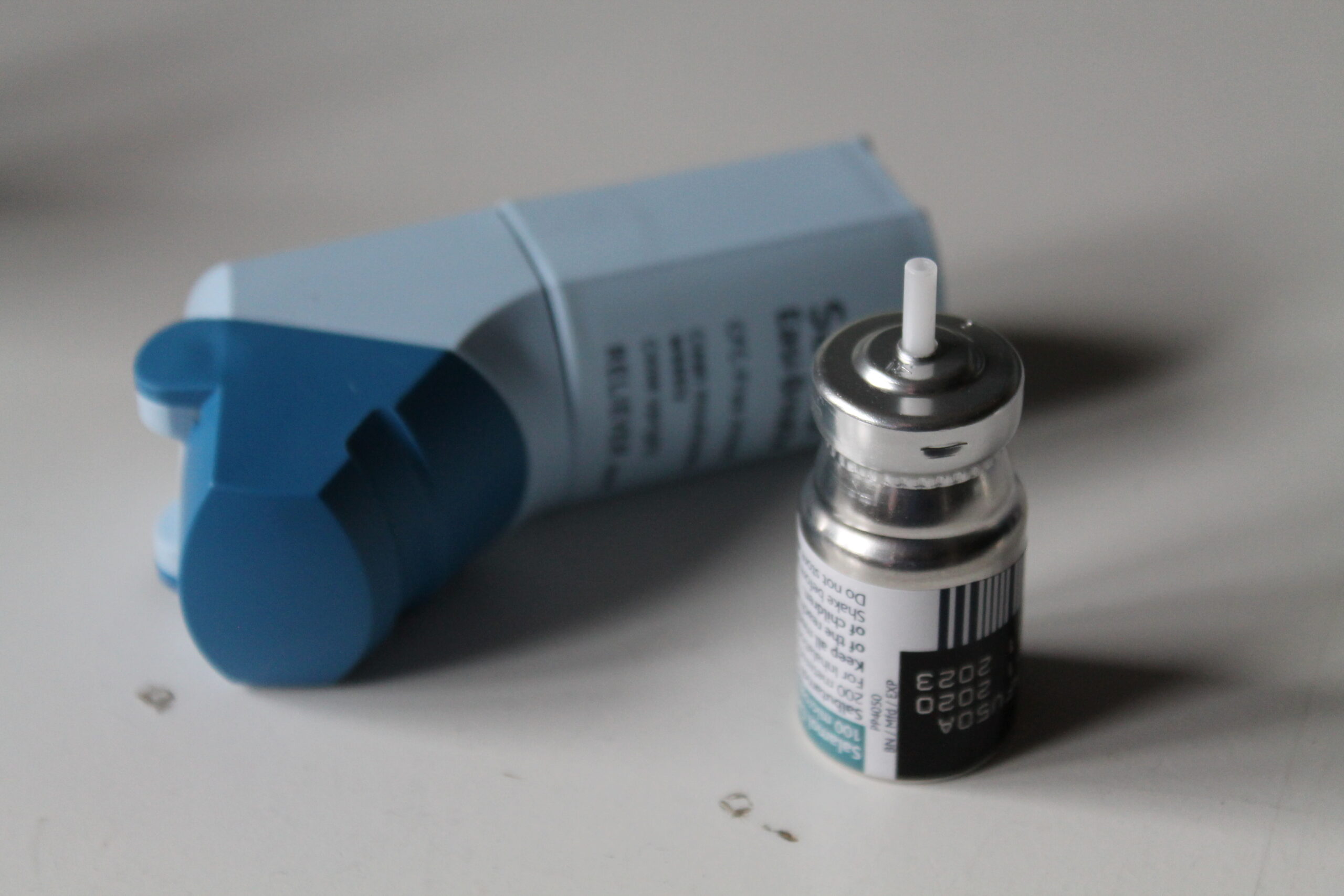 25 Feb Helping the Planet to breathe a little easier

One of the biggest single sources of greenhouse gas for which the NHS is responsible comes via something that many patients – and staff – carry around in their pockets. A tiny, blue plastic tube, normally less than 10 cm in length.

The villain of the piece is the Metered Dose Inhaler (MDI), used to deliver Salbutamol and similar medication.

Salbutamol is a lifesaver and a life changer. It’s one of those miracle drugs that is incredibly effective, rapid-acting, and yet (for most patients) has almost no significant side effects – other than the joy of suddenly being able to breathe! It’s used to relieve the symptoms of asthma – a debilitating lung condition with a real capability to kill. 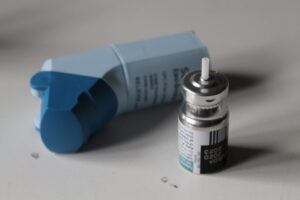 Asthma is a condition that affects your airways – the small tubes that carry air in and out of the lungs. It can be triggered by one or several factors such as allergies, anxiety, sensitivity to weather changes or physical exertion.

The thing is, it’s NOT Salbutamol that damages the atmosphere. The problem is caused by the propellant used to expel the drug from a tiny pressurised canister.

The propellant needs to be highly compressible to make the device small and portable. It also has to be chemically inert to avoid reactions with the drug, which is highly reactive (hence its ability to act quickly). And it is these very properties that make the propellant damaging to the atmosphere.

So what’s the scale of the problem?

First up, the propellants used are a group of chemicals called Hydroflouroalkanes (HFAs). HFAs were introduced into inhalers in the 1990s, as a solution to ozone-damaging CFCs. But they are 1,000 to 3,000 times more effective at trapping heat in the atmosphere than is Carbon Dioxide (CO2). According to research published by the University of Manchester, one puff of a typical MDI using the common propellant HFA-134a has a global warming potential equivalent of 0.13 kg of CO2.

The second problem is their incredible stability; great for preserving the drug while in the inhaler, but it means they take decades to break down in the atmosphere, and some of the compounds they degrade into are also ‘greenhouse gases’.

The third issue is the sheer number of MDIs in use. According to an article in Nature (13th May 2020, by Sarah DeWeerdt – https://www.nature.com/articles/d41586-020-01377-7), the annual greenhouse gas emissions from MDIs in the UK are equivalent to those of roughly 600,000 diesel cars. In the USA it is the 7th most commonly prescribed drug with over 60 million prescriptions. Across the whole NHS, 25% of emissions are related to medicines – with 3% coming directly from the use of MDIs – that’s not far short of the emissions from staff traveling to and from work. MDIs make up about a quarter of the carbon footprint from GP prescriptions.

So what to do?

The simple answer is to reduce the use of MDI’s and persuade patients to use other types of inhaler, such as Dry-powder or Soft-mist inhalers. But these have limitations. Dry powder inhalers require a higher inspiratory force, so aren’t suitable for all patients, while Soft-mist inhalers are complicated and expensive devices.

In the long-term, clearly, some very clever chemists and pharmacists will need to get creative in the lab and find a new, less damaging propellant, or some clever designer will need to come up with something as simple and safe, portable, and generally easy-to-use as a MDI, but which doesn’t rely on pressurised HFAs to operate.

My colleague Chris is asthmatic. His condition is generally severe, but well controlled. He uses a dry powder preventer morning and night, but carries an MDI ‘reliever’ to help manage symptoms during his working day. 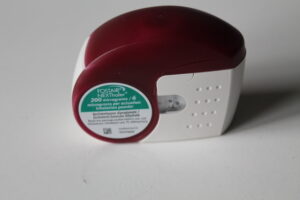 After a chat with his asthma nurse, she agreed to switch Chris to a Dry-powder reliever too. Given that this coincided with the complication of Chris catching COVID, we thought other asthma sufferers and clinicians might find his experiences so far to be useful.

“I always feel it’s harder to breathe out than in,” says Chris. “I’ve never had a problem taking my Dry-powder preventer, so my nurse thought a dry-powder reliever would work for me.

“While I’ve been ill I’ve needed to take my reliever 6 or 8 times a day, at least. That’s much more often than usual. However, I found that my new Dry Powder inhaler was just as easy to take. I also felt it was at least as effective – not as quick-acting but longer-lasting. 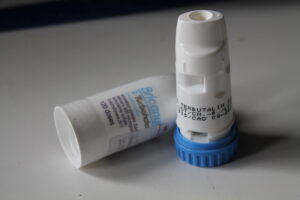 A 120 dose terbutaline sulphate ‘reliever’ via a dry-powder inhaler, designed by AstraZeneca

“I’m carrying both at the moment, as an emergency backup and also because I currently own only one dry-powder device, while I have several MDIs stored in places such as on my desk and in my car, so I can find one if I need it. Now I’m recovering well, I find I only have to take the Dry-powder reliever once or twice a day.

“Based on my experience so far, I would recommend all asthmatics discuss a switch to dry powder with their nurse. And if you’re suitable, please do make the change because it will make a disproportionately huge benefit to atmospheric greenhouse gas emissions.”

You can get more information about alternative treatments and drugs for asthma from the charity Asthma UK: https://www.asthma.org.uk/

Ana Smith works as Sustainability Administrator within the sustainability team of a large NHS Foundation Trust in the East of England. She originally trained as a nurse and worked at several hospitals - on wards, and running research projects - before studying Sustainability and Ecology in Sweden.