Once upon a time 3D-Printing was called Rapid Prototyping

Posted at 14:04h in Engineering & Manufacturing, Imaging by chris@precisionpr.co.uk

The democratisation of one-off digital-to-physical things

Once upon a time in a far, far world, people used to make one-off prototypes of planned new products using really exotic stuff and incredibly expensive computer systems. Today, in a small office near you, someone is doing the same thing for a fraction of the cost. And without the need to prepare baths of unpleasant organic chemical compounds. The rise of the 3D-Printer is not a new thing: it’s just got a catchier name and a more user-friendly price tag. So how has it got here, and what exactly does ‘here’ look like?

An introduction to CAD

As a child I had always wanted to be involved in car design and mechanical engineering. As a teenager I was too lazy to get myself through sixth-form and off to university. My career dreams were partially fulfilled by working at Avon County Council Highways & Engineering Department, where I ended-up operating the department’s super-mini computer as it was used to create the designs of what became the Bristol Ring Road and several other major highways schemes. This was my first introduction to Computer Aided Design (CAD).

Roll on a few years and I’m helping show journalists round the Williams F1 team factory. Damon Hill’s Championship-winning car sat in the entrance hall behind the door we’ve just come through. There is science fiction made real in this place. 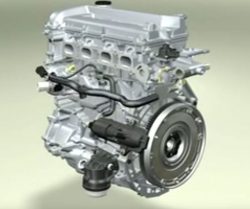 Back in the 1990s I was learning my trade in PR at the brilliant Insight Marketing and Communications Limited. One of my clients was SDRC (Structural Dynamics Research Corporation). I absolutely loved working on that account. SDRC made 3D-Solid Modelling software for designers.

At the time SDRC was the technology leader in the design software market. Most of the F1 Grand Prix teams (and a host of other competition car manufacturers) used their software, proving the point. SDRC software was also used by several manufacturers, including the Ford Motor Company. Take a look at this video to for the Duratec engine, modelled using SDRC software. 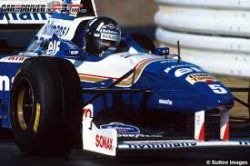 Williams was one of the manufacturers using SDRC’s software. Their designers developed solid models which were then used to generate tool-paths for multi-axis milling machines that carved moulds, or else cut components directly from blocks of metal and plastic. If the team needed a part to be redesigned between races it could be modelled, made, shipped and on the car within 72-hours. But the cost was truly incomprehensible – £25k for each UNIX workstation computer and about the same for the software. And that’s just one workstation – Williams had dozens.

For more mainstream products the costs could be scaled back a little, and you might not need a room full of designers if you were making a shower head. But you probably still wanted a prototype to see what it looks like in the flesh, and to gauge reactions from potential buyers. This is where Rapid Prototyping steps up. You could create your model, but instead of a tool-path, you generated the path that a laser might shine on a bath of light-cured epoxy resin. The model would gradually drop into the bath as the laser shone on the surface. After a clean-up and finishing you had a very good approximation of your finished item.

SolidWorks – 3D for the masses ?

The next step to democratisation was the development of solid modelling capability on a much cheaper computer. I was fortunate enough to be part of the team that launched SolidWorks onto the unsuspecting British design community. This delivered many of the same solid modelling features as SDRC but on a Microsoft Windows PC costing a fraction of the price of a UNIX workstation. And the software was cheaper too. True it didn’t have all the clever simulation capabilities for structural testing etc., but do you really need that if you’re making shower heads or vacuum cleaners?

So while SolidWorks started the revolution in terms of computing and software costs, it would still be several years before someone came up with a technology that could turn digital models into cheap physical models. But about ten years ago someone came-up with a way to make models by melting and depositing plastic filament, and someone named it 3D-Printing, and all that changed. 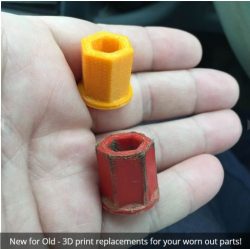 There are of course many variations on 3D-Printing, just as there were different processes to create ‘rapid prototypes’. But essentially, they all work by turning a digital model into multiple physical layers that are bonded together. People have created digitally controlled concrete pumps (that only seem to make round buildings, but I’m sure that will change), laser-sintered metal components, and of course the plastic models most people will have seen.

But while hobbyists and video bloggers may have made the most noise about 3D-Printing, a new bread of designers have started offering their services to the public in much the same way that graphic artists and copy shops cater for flat-surface printing needs.

I caught up with one – Trevor Day – to help me get up to speed with the latest thinking. Trevor offers design and build services from his business (Enterprise XD Design) in Essex, a few miles from Precision PR.

“In the last 10-years, 3D-Printing has moved from an arcane art form used purely by professional product designers into something that can be accessed by the general public,” says Trevor. “It has changed from a method of making prototype products and speeding up product testing into a whole range of applications. But while many people will have heard of 3D-Printing, very few understand it or what you can actually  do with it.”

Things you can make

“People choose it [3D-Printing] to create limited production runs and one-off items to professional standards of fit and finish. I’ve been asked to recreate unobtainable spare parts, or to make models, souvenirs and gadgets,” says Trevor.  “There are only four factors that limit what you can make using 3D-Printing techniques; size, strength, purpose and your imagination. And all four can have effective work-arounds, though some uses are just too difficult to make 3D-Printing a sensible approach.”

The size limitation is changing all the time. Typical low-end hobbyist printers (such as the Da Vinci Junior 3D Printer from Maplin) can print with a single ABS filament within a 15x15x15cm spaces and cost around £300. Trevor’s main printer has multiple filaments and can print up to 20cm wide using a variety of materials. “You need to print some items in sections. You then need a bit of extra thought put in to how to join them,” he says. “But you can also design bigger pieces and have them printed by a 3rd-party. There are several companies offering their services to print items up to 100x100x100cm (one cubic metre) from your design.”

Making it in Metal

Strength again requires a little thought. “3d-Printing builds in layers. Like the grain in a piece of wood, it will have different strength and stiffness along the layers or across the layers,” explains Trevor. “Depending on the purpose of the item this may or may not be a problem. But like working in wood, you can design to use it to your advantage or design around the problem. Sometimes you need to think about the printer path and the direction that the material is deposited. Sometimes it means adding reinforcement, sometimes it’s choice of material and sometimes it means adding a step to the process.”

Selective laser sintering (SLS) is a 3D-Printing method that fuses metal powders together with a laser. Designers increasingly use it for complex automotive and engineering components. For example, Bugatti used the technique recently to make complex brake parts.

Trevor also uses 3D-Printing to make custom jewellery using a range of precious and semi-precious metals. “To do that, I print a wax model and then use a lost-wax mould to cast in the metal.”

That really leaves the last limitation as your imagination. Once you’re past that it’s down to how many finished items you need. But with the cost of materials and printers falling all the time, even the economics of using 3D-Printing to create large numbers of finished items is changing.

“Guns. It’s been done, but it’s understandably illegal and it’s dangerous,” explains Trevor. “There are designs for a 3D-Printed single-shot pistol on the internet. However the inherent weaknesses between layers makes them very unpredictable devices. Plastics are not good at containing sudden pressure changes. They are good for ancillary parts such as handles, but you need metal for pressure containers.” 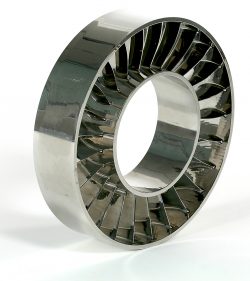 Aerospace Stator Ring – made in one piece – 3T RPD Ltd

The limitations are ultimately the economics – the bigger the item the higher the printing costs, with a flat pretty linear progression for repeats (meaning printing more doesn’t significantly reduce the unit cost) – and human imagination (which might mean a law). Plus a bit of common sense.

“You can certainly overcome most strength problems and size problems,” says Trevor. “It just takes a bit of thought in the design and choice of materials. You might need to find a print agency capable of printing large sizes and using exotic materials. If you need a small number of repeats of your design – simple or complicated – you can do it in 3D-Printing.”

Industrial print consultancies such as 3T RPD Ltd can print large engineering components in metals or a range of plastics. Designers such as Trevor’s Enterprise XD Design can make parts, custom-designed items and even small castings.

That’s hard to say. I’ve been working in this field on and off for 20-years. In some ways it has changed hugely. But you can also view those changes as just an evolution of ideas and the economics of IT. Compared with 20-years ago, 3D-Printing has gained a wider choice of materials and a snazzy new name. In my view, the real change is that it is now a genuinely economic option for a huge range of applications. The only limitation I can see for 3D-Printing is human imagination.

I’d like to thank Trevor Day of Enterprise XD Design Limited for his comments and the pages of material I still have for future articles. The Stator Ring picture was taken from 3T RPD Ltd’s website where you can find some fantastic case studies and images of prototypes and finished items made in a variety of plastics and metals. I-DEAS software is now marketed by Siemens as part of their PLM range. SolidWorks is now owned and marketed by Dassault Systems. I could have also mentioned AutoCAD from AutoDESK. I believe that too now has some 3D modelling technology, but SolidWorks was by far the earliest on a Windows platform.

If you would like to discuss PR, marketing communications or case studies in the engineering or design industries, please call us as we’ll be delighted to help.