Posted at 12:39h in Exhibitions, Imaging by chris@precisionpr.co.uk 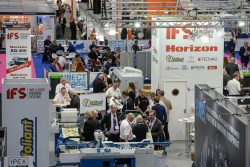 This week I took the time out to visit the NEC for IPEX 2017. Billed as ‘The UK’s premier international print show’, there were several reasons I wanted to go.

The first reason was that IPEX 2017 is ‘my show’. Well, that’s a slight exaggeration, but I feel some ownership of it as I won the contract to manage press relations for the show for my previous employer, and I wanted to see how my initial plans had panned out. Of course, I went on Day 2, and all the press went on Day 1, but apart from that things seemed to have gone roughly according to the plan I laid out a couple of years ago.

The second reason was that I wanted to see a couple of former colleagues, which I did, and which was nice.

And the third was that my colleague Simon Hill and I had been looking to meet up with some prospective clients, and he had set-up three meetings for me at the show. I’m pleased to say that all three meetings went well and produced some follow-up activities that I hope will turn into business for Precision PR. I even got chatting (quite unexpectedly) a manufacturer of after-fit UV curing lights which led to giving a quote for some brochure work..

Busy but not ‘banged out’

But my initial reaction to the show is a bit mixed. Firstly because the organisers (Informa Global Exhibitions) missed their target of 400 exhibitors, so the show felt a little bit smaller than expected (but it’s the NEC so it still felt pretty big). Secondly because none of the really big printer manufacturers were really in evidence (no stands for Epson, Hewlett Packard, Cannon – all missing). And thirdly, because while not quiet, by the standards of some print shows I’ve been to, IPEX on Wednesday afternoon wasn’t busy. 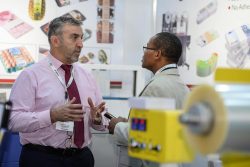 That said, I think it was a better show because of these points. It meant that the show wasn’t monopolised by glitzy stands draped in huge swathes of designer designed fabric and Formula One cars. And that meant that people were actually looking at the smaller stands belonging to interesting technology companies and businesses that could supply a solution to their ‘now’ requirements, rather than splash the champagne around tomorrow’s answer to next week’s question. And in turn, that meant that people were actually conducting real business and selling real products and services at the show. Surely that is the mark of a successful trade show.

So I’d like to congratulate event director Rob Fisher and his team at Informa, and Dave Ingle and the team at Peter Bush Communications for promoting the show so successfully within the trade press. The balance they faced was creating a show that performed vs a show that looked like it performed – they are not the same thing. I think that if any one of the big printer or press manufacturers had broken ranks and exhibited then they would have diminished the show. But how do you judge these things?